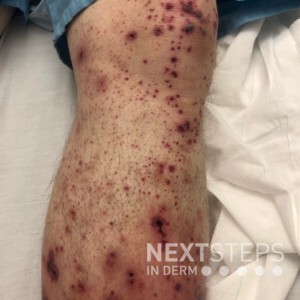 The correct answer is B. Perivascular IgA deposition.

The associated image depicts the classic “palpable purpura” of cutaneous small-vessel vasculitis (CSVV). A specific type of CSVV now known as IgA vasculitis (formerly Henoch-Schonlein Purpura) typicallt presents with palpable purpura on the lower extremities and buttocks, along with arthritis, hematuria, colicky abdominal pain +/- GI bleeding and vomiting. A biopsy for H&E reveals leukocytoclastic vasculitis, and a biopsy for DIF shows perivascular IgA, C3, and fibrin. Treatment is mainly supportive as it is typically self-limited.