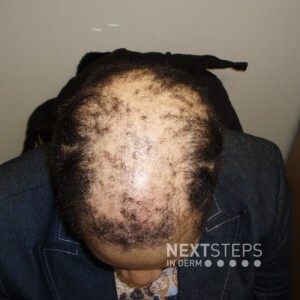 Central centrifugal cicatricial alopecia is a new term adopted by the NAHRS consensus group to encompass the terms hot comb alopecia, follicular degeneration syndrome, pseudopelade in African Americans, and central elliptical pseudopelade in Caucasians. In general, it is a condition that presents with flesh-colored, noninflammatory cicatricial alopecia of the central scalp that, over time, enlarges centrifugally. Pseudopelade of Brocq can mimic alopecia areata, lichen planopilaris, and DLE. In addition, central centrifugal cicatricial alopecia (CCCA), a noninflammatory condition of the central scalp that is seen primarily in black women. CCCA usually presents as a symmetric patch, unlike the irregularly bordered, typically atrophic plaques seen in classic pseudopelade of Brocq.

Central Centrifugal Cicatricial Alopecia (CCCA) is a form of scarring alopecia on the scalp that results in permanent hair loss. It is the most common form of scarring hair loss seen in black women. However, it may be seen in men and among persons of all races and hair color (though rarely). Middle-aged women are most commonly affected. Early diagnosis of CCCA is important because medical intervention can prevent further progression that often results in extensive, permanent hair loss. Diagnosis is based on clinical features, scalp biopsy and exclusion of other hair loss disorders.

Scalp biopsy should be taken from an active edge of a patch of alopecia rather than the centre of a scarred area. Histopathology reveals a lymphocytic inflammatory infiltrate (inflammatory cells) around the infundibulum (base of the hair follicle), and fibrosis (scarring). Premature desquamation (peeling) of the inner root sheath is a common feature.