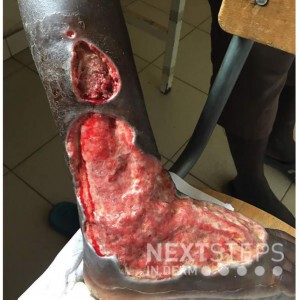 The image depicts a Buruli ulcer, which is due to infection with Mycobacterium ulcerans. Buruli ulcer is a neglected tropical disease of skin and subcutaneous tissue that can result in long-term cosmetic and functional disability. It is a geographically restricted infection but transmission has been reported in endemic areas in more than 30 countries worldwide. The heaviest burden of disease lies in West and Sub-Saharan Africa where it affects children and adults in subsistence agricultural communities. Mycobacterium ulcerans infection is probably acquired via inoculation of the skin either directly from the environment or indirectly via insect bites. The environmental reservoir and exact route of transmission are not completely understood. Treatments include excision, local heating (as mycobacteria prefer cooler temperatures); drug therapy is often disappointing.

The other mycobacteria are not the most common cause of a Buruli ulcer.