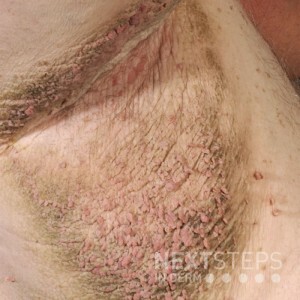 Acanthosis nigricans is characterized by velvety brown plaques most commonly seen on the neck and intertriginous skin.  It is most commonly associated with insulin resistance.  In the malignancy related form, the lips and palms may be involved.

Eruptive xanthomas are pink-yellow papules that arise on the extensor surfaces of extremities and the buttocks as a result of hypertriglyceridemia.  Hypertriglyceridemia may be the result of inherited hyperlipoproteinemias or due to medications such as isotretinoin.

Peripheral eosinophilia may be noted in a variety of atopic or allergic conditions including atopic dermatitis or drug eruptions.  Eosinophilia may also indicate parasitic infection.