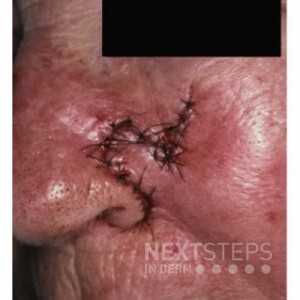 The correct answer is A. Transposition.

Advancement flaps (ex: O-T, A-T, O-U, O-H flaps) recruit nearby tissue and advance the tissue into the primary defect. In essence these are burrows triangle displacement flaps as the burrows triangles are taken in more cosmetically favorable locations or in areas of increased tissue laxity. This flap may appear to be an O-U flap but it is not.

Rotation flaps are similar to advancement flaps which displace the burrows triangle to a more favorable location or in an area of tissue laxity to recruit tissue to the primary defect. The main difference in the main plane of movement being rotational rather than in a straight line. Rotation and advancement flaps can both have vectors of rotation and advancement – they are named by their primary vector of movement. This is not a rotational flap.

This is not a linear closure. A linear closure is a standard closure where a burrows triangle is taken from either side of the defect and closed in a line in order to avoid standing cones or dog-ears.