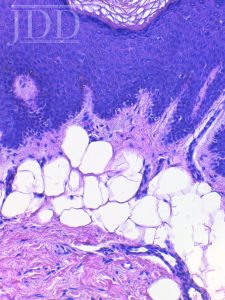 The correct answer is B: This is caused by a mutation in the PORCN.

This patient has Goltz syndrome. Goltz syndrome, also known as focal dermal hypoplasia, is a highly variable X-linked dominant disorder with abnormalities in tissues derived from the primitive ectoderm and mesoderm.1 Goltz is caused by mutations in the PORCN gene, which is involved in the secretion and signaling of Wnt proteins playing a role in embryonic tissue development. The majority of patients (roughly 90%) are female. Only mosaic males survive as non-mosaic male mutations are antenatally lethal. Almost 95% of all Goltz cases arise de novo, which partly reflects the decreased likelihood of reproduction by severely affected women and the lethality of PORCN mutations.2 Rare familial cases do show anticipation, with the offspring being much more severely affected than the parent and has a higher burden of mutant cells.3

The clinical features of Goltz vary depending on the proportion and distribution of cells expressing a mutant X chromosome. Streaks of vermiculate dermal atrophy and telangiectasias are often present at birth. Later, hypo- and hyperpigmentation as well as fat herniations will develop. Histopathologic examination often shows decreased thickness of the dermis with adipocytes extending into the papillary dermis.

Raspberry-like squamous papillomas can appear in any location but tend to favor the lip, distal extremities and anogenital regions. These can be painful, bleed and become enlarged. It is important to recognize that these are features of Goltz syndrome as they can be mistaken as condyloma acuminatum but there is no HPV association and patients are immunocompetent.4

Limb abnormalities are present in about half of Goltz cases with the most common findings being syndactyly and ectrodactyly. Imaging of the lower extremities characteristically shows osteopathia striata. Patients may also have unilateral eye abnormalities including coloboma or aniridia. Dystrophic nails, sparse hair, abnormal teeth and dysmorphic facies can also be seen.4

Treatment is supportive with appropriate subspecialist referrals based on associated abnormalities. These might include orthopedics, genetics, oral surgeons, physical therapists and ophthalmologists.1 The telangiectasias may be improved with pulsed dye laser treatment and exophytic squamous papillomas with cryotherapy, curettage or photodynamic therapy.