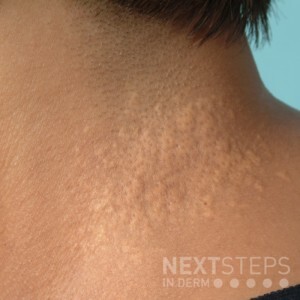 The correct answer is A. Swimming.

Pseudoxanthoma elasticum (PXE) is a systemic disorder characterized by small yellow papules typically on the neck (as in this patient), axilla, or flexural creases, beginning in childhood or adolescence. This systemic disorder also affects the retina, in the form of angioid streaks. In the context of physical, contract sports, these angioid streaks may results in retinal hemorrhage, which can ultimately result in vision loss. Therefore, sports such as boxing, football, soccer, hockey, wrestling, etc should be avoided. Swimming, which is non-contact, could be suggested instead.

Boxing, football, soccer, and hockey are all considered contact sports and therefore should be avoided in patients diagnosed with PXE.