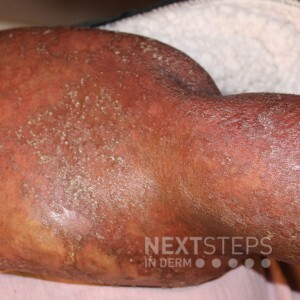 The correct answer is D. Deficiency of the IL-36 receptor antagonist.

The patient presents with generalized pustular psoriasis (GPP) secondary to deficiency of the IL-36 receptor antagonist (DITRA). IL-36R antagonist is in the IL-1 family and antagonizes proinflammatory IL-36. DITRA has been shown to cause familial and sporadic GPP as well as localized acrodermatitis continua of Hallopeau. It is inherited in an autosomal recessive manner. It accounts for 21-82% of cases of GPP. DITRA has a younger age of onset and higher risk of systemic inflammation compared to non-DITRA GPP.

ABCC6 mutation is seen in Pseudoxanthoma Elasticum. IgG antibodies directed against FceR1 are seen in Chronic Idiopathic Urticaria. Anti-transglutaminase 3 antibodies cause the skin findings seen in Dermatitis Herpetiformis. Mutations in SPINK5 are seen in Netherton Syndrome.