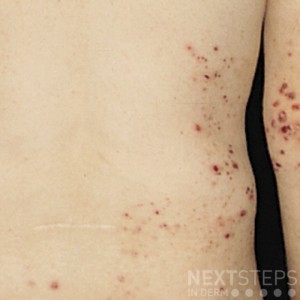 The correct answer is B. Only 20% of patients have a gluten-sensitive enteropathy.

All of the statements regarding dermatitis herpetiforms, or “Duhring’s Disease,” are true except for statement B. Virtually all DH patients have gluten-sensitive enteropathy, although only 20% of them have symptoms (such as diarrhea, steatorrhea, weight loss, bloating, and malabsorption).

Dermatitis herpetiformis (DH) is a cutaneous manifestation of gluten sensitivity. Although over 90% of DH patients have evidence of a gluten-sensitive enteropathy, only about 20% have intestinal symptoms of celiac disease (CD). Both the skin disease and the intestinal disease respond to gluten restriction and recur with institution of a gluten-containing diet.

Circulating IgA antibodies to TG2 (an endomysial antigen) have been identified by indirect immunofluorescence microscopy using a monkey esophagus substrate, and the presence of these antibodies correlates with the degree of gluten-sensitive enteropathy. IgA anti-TG2 antibodies are not responsible for the IgA deposition in skin.

There is a strong genetic association with the HLA genotype DQ A1*0501, B1*02 (which encodes HLA-DQ2 heterodimers), in addition to other unidentified non-HLA genes.

The endomysial antigen has been identified as TG2, and antibodies directed against transglutaminase are important in the pathogenesis of DH and CD.