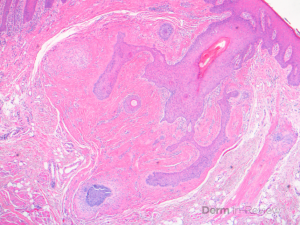 Question 2: The correct answer is B. These patients should be referred to nephrology and pulmonology.

This is an image of a fibrofolliculoma which is seen in Birt-Hogg-Dubé syndrome (BHD). BHD is due to an autosomal dominantly inherited germline mutation in the FLCN gene which encodes the protein folliculin and can affect the skin, kidneys and lungs. It is an autosomal dominant genodermatosis.

The proposed guidelines for diagnosis of BHD require either one major or two minor criteria. The major criteria include at least five fibrofolliculomas or trichodiscomas with adult onset or a pathogenic FLCN germline mutation. Pathology of a fibrofolliculoma reveals strands of immature follicular epithelium radiating from a central follicular-like structure surrounded by a pink fibrous orb. Trichodiscomas are fibrofolliculomas cut in a plane section where the epithelial strands are not shown. Fibrofolliculomas usually occur on the face and upper trunk and patients may develop new ones throughout adulthood. They are the most common skin manifestation of BHD which can also have acrochordons, trichodiscomas, hyperseborrhea and multiple epidermoid cysts.

The minor criteria are a first degree relative with BHD, multiple lung cysts in the lower lobes with or without history of spontaneous pneumothorax, and early onset or bilateral renal cell cancer. Patients with BHD should start surveillance with pulmonology and nephrology beginning at 20 years old and also be referred for genetic counseling. Pulmonology may get baseline CT imaging at diagnosis to evaluate any existing lung disease. Smoking can increase the risk of developing a pneumothorax so this should be advised against. Patients with BHD have a risk seven times greater than the general population for developing a renal tumor and almost one third of patients will develop one. The most common histologic type of RCC in BHD is the chromophobe, followed by oncocytomas and mixed variants. Although there are no set guidelines for when to start and how frequently to monitor, renal imaging should be used for monitoring with either CT or MRI which are more accurate than ultrasound.

Answer choice C describes Brooke-Spiegler syndrome which is caused by a mutation in CYLD, a tumor suppressor gene, and is inherited in an autosomal dominant pattern. It is characterized by three adnexal tumors including cylindromas, spiradenomas and trichoepitheliomas which usually appear in late childhood or early adolescence and patients can continue to develop new ones throughout adulthood. These tumors are generally benign and do not require intervention however they can be disfiguring and depending on location or size they could cause problems with vision or hearing. There is also the potential for malignant transformation into cylindro- or spiroadenocarcinoma. Patients are also at higher risk of developing basal cell carcinomas, thus patients should have regularly skin checks with their dermatologist.

Answer choice D describes Cowden syndrome which is a hamartomatous disorder characterized by cutaneous findings of facial trichilemmomas, punctate palmoplantar keratoses, lipomas, skin tags, sclerotic fibromas, and oral papillomas. Cowden syndrome is due to an autosomal dominant mutation of PTEN, a tumor suppressor gene. Hamartomas can involve of other organ systems, the most common being thyroid, breast and gastrointestinal. Thyroid findings include adenomas, goiters and the most important to surveil for, follicular carcinoma. Patients are at a higher risk of developing fibrocystic change and fibroadenomas of the breast and also adenocarcinoma, the most common malignancy occurring in Cowden syndrome which occurs in almost half of women with Cowden syndrome. Patients can also have hamartomatous polyps in the colon but these have a low risk of malignant transformation. Lhermitte-Duclos disease, a gangliocytoma of the cerebellum, is one of the criteria for Cowden syndrome and leads to increased intracranial pressure and seizures. Management should focus on monitoring for malignancy and patients will need to have close follow-up with several different specialists.

Answer choice E would make sense if these were basal cell carcinomas (BCC), as seen in Basal cell nevus syndrome (BCNS) however the pathology represents a fibrofolliculoma. BCNS is due to an autosomal dominant mutation in the PTCH gene, a tumor suppressor protein in the sonic hedgehog signaling pathway. In addition to multiple BCCs, patients have abnormalities of bones, central nervous system, soft tissues, eyes and endocrine system. Diagnosis is based on either major criterion and molecular confirmation, two major criteria or one major and two minor criteria. The hallmark major criterion is the diagnosis of multiple BCCs, that can be early in onset around puberty and may resemble melanocytic nevi, acrochordons or seborrheic keratoses. Major criteria also include palmoplantar pits, asymptomatic odontogenic keratocysts of the jaw, calcification of the falx cerebri and may develop medulloblastoma during infancy. Minor criteria are cleft lip or palate, ovarian/cardiac fibroma, ocular abnormalities, macrocephaly, rib anomalies, skeletal abnormalities. Treatment involves frequent skin checks, biopsy of suspicious lesions and treating BCCs with standard methods with or without the addition of vismodegib or sonidegib, both smoothened inhibitors. These medication decreases BCC tumor burden and prevents new BCCs, however due to side effects like dysgeusia, hair loss and muscle aches, half of patients discontinue due to poor tolerability.