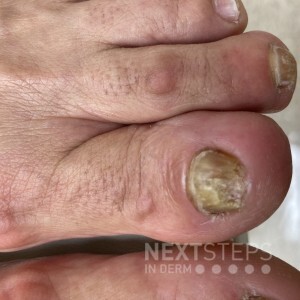 The correct answer is B. Tinea pedis.

Fungal infection of the nails is also known as onychomycosis. It is increasingly common with increased age. It rarely affects children. Tinea unguium often results from untreated tinea pedis (feet) or tinea manuum (hand). It may follow an injury to the nail or inflammatory disease of the nail.

Tinea manuum can lead to onychomycosis, but it would more likely lead to fingernail disease than toenail disease. Inflammatory diseases of the nail, such as psoriasis, can cause identical changes to the nails. Overall, the most common cause of nail dystrophy is onychomycosis. Trauma, such as injury to the foot, can also lead to nail dystrophy. It would be less common to see sub-ungual debris but with repetitive trauma this could occur. It would still be less likely that onychomycosis. Trauma and inflammatory diseases of the nail can also pre-dispose to onychomycosis. Hereditary disorders such pachyonychia congenita can also present with similar findings. Hereditary disorders can create twenty nail dystrophy or be associated with signs in as little as one nail. However, this would be much less common that onychomycosis.