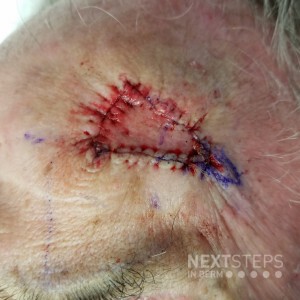 The correct answer is A. Advancement.

This is an example of an island pedicle flap (or a V-Y flap), which is a type of advancement flap. In an advancement flap, the primary movement is a sliding motion. Therefore, the flap moves almost entirely in one direction or in a linear fashion.

Rotation flaps alters the direction of the major closure tension forces and therefore usually have curved edges. Examples include an O->Z flap, a Reiger flap, or a Mustarde flap. Transposition flaps include bilobed flaps, nasolabial flaps, rhombic flaps, and a Z-plasty. Interpolation flaps are two staged flaps, such as the Abbe flap, the Hughes flap, or a paramedian forehead flap. An axial flap is one in which the blood supply is based on a named artery.