“All disease starts in the gut.”  This saying may sound like a new fad, but in fact, this is quoted from Hippocrates himself (470-36 BCE) who proposed this— not ten years ago, a hundred years ago, but thousands of years ago!  Praised as one of the most influential figures in medicine and healing, Hippocrates upheld the theory of autointoxication, which claimed that by-products of incomplete digestion may poison the body and, therefore, cause disease.  Intrigued? Read on.

Let’s talk about psoriasis– the prototype chronic inflammatory disease in dermatology.  If Hippocrates’ theory is true, how does this apply to psoriasis?  As dermatologists, we rarely discuss gut issues with psoriasis patients.  We are trained to target the end-result inflammation— with topicals after topicals, followed by systemic immune-suppressants and biologics.  But what if we turned our focus to the cause of the inflammation?  The lessons that Dr. Haines Ely shared in his talk “Is Psoriasis A Bowel Disease?” presented at the 2020 Integrative Dermatology Symposium were truly enlightening.

A new way of treating psoriasis

Okay, raise your hand if you like spending hours on biologics prior authorizations and handling patient complaints about medication cost.  No one!  Wouldn’t it be amazing to recommend systemic treatments that work by reducing the overall inflammation, without the hassle of involving insurance companies and chronic lab monitoring?  If your answer is yes, you’re gonna love this!

While the advent of biologics has transformed the course of disease for many, Dr. Ely states that the “treatment of psoriasis with biologics is like suppressing the smoke without mention of the fire.”  Provocative, isn’t it? But you know what, I can’t help but agree.  In my previous life as a gut immunologist, I spent countless hours at the bench investigating cytokines responsible for inflammatory diseases and strategies to suppress them.  But in my gut (pun intended), I knew there had to be something more.  I gotta tell you—something really clicked when I heard Dr. Ely’s talk and read his paper1.

As dermatologists, we rarely discuss gut issues with psoriasis patients.  We are trained to target the end-result inflammation— with topicals after topicals, followed by systemic immune-suppressants and biologics.  But what if we turned our focus to the cause of the inflammation?

Sure, psoriasis is a cutaneous disease.  But the comorbidities of psoriasis are profound—psoriatic arthritis, obesity, metabolic syndrome, cardiovascular diseases– all of which have a common thread that ties them together.  And that’s chronic low-grade inflammation. Endotoxemia (high levels of endotoxins, i.e, lipopolysaccharide or LPS) is thought to be responsible for the inflammatory status2.  This may be due to increased gut permeability (“leaky gut”) that allows bacterial components to translocate to the circulation.  Alterations in the gut microflora diversity and composition have been proposed as possible mechanisms to explain increased endotoxin in metabolic syndrome.  Once in the circulation, endotoxin induces proinflammatory cytokines.

In 1975, Dr. Ely himself discovered the “bypass surgery syndrome” (which later was renamed bowel-associated dermatosis-arthritis syndrome).  Patients presented with papulopustules, arthralgia and hypersensitivity to bacteria (especially Streptococcus pyogenes, the same bug that causes strep throat)– all after a bypass surgery.  Almost all these patients had antibodies to peptidoglycan (PG: well-conserved and essential component of the bacterial cell wall).  Interestingly, his psoriasis patients also had high titers of PG antibodies!3   This became the basis of his hypothesis that psoriasis may have a similar mechanism that involved the gut.

It was later discovered that psoriatic skin lesions were also loaded with PGs and PG-specific Th1 cells4.  PGs are shown to have similar effects in vivo as endotoxin.  So, it makes sense that acute psoriasis and endotoxemia have similar symptoms: fevers, leukocytosis, increased capillary permeability, elevated liver enzymes, and decreased complement levels.  Moreover, gut bacterial DNA and other bacterial markers are present in psoriatic blood at higher levels, suggesting a “leaky gut” in psoriasis.  Fascinating!

Now, figure 1 below shows a picture from Dr. Ely’s first talk on this topic in 1981.  In psoriasis, PGs are absorbed from the gut into the 1) portal circulation, causing liver damage and 2) systemic circulation and end up in the skin and joints– leading to psoriasis and psoriatic arthritis, respectively.  Dr. Ely calls psoriasis a “cathartic” event, whereby the body increases skin turnover in order to shed the PGs that is responsible for the systemic inflammation. Whoa, what a concept! It makes sense, though, doesn’t it?  So, how does Dr. Ely suggest we treat this disease?

Psoriasis patients have bad liver and abnormal bile.  They also have a significant reduction of bile acid in bile5.  Why does this matter? Well, bile acids have the ability to split endotoxins into non-toxic fragments, and they are also bactericidal.  So, what if you replete bile acids in psoriasis?  In one study of 500 psoriasis patients who were treated with bile acid (dehydrocholic acid) for 1-8 weeks, 434 (78.8%) became asymptomatic, compared to only 24.9% who received only conventional therapy6.  Bile acid treatment of acute psoriasis led to 95.1% complete recovery.  In another study, treatment of liver disease with bile acids led to dramatic improvement in those who also had psoriasis7.

Here you go.  Dr. Ely says that brands don’t matter and most of these are very affordable.  I looked it up, and each of the following should cost about $10 –20 per month.

Now, it’s important to discuss and encourage a low-fat diet that is high in high-fiber (vegetables and fruits) and low in meats.  It’s imperative that patients avoid alcohol and any peppers while on bile acid therapy, which can interfere with its efficacy.

Here are before and after photographs after just one month after this therapy.  I know, it’s remarkable!  Oh, and p.s., Dr. Ely recommends oral vitamin D in psoriasis patients — 5000IU vitamin D a day. 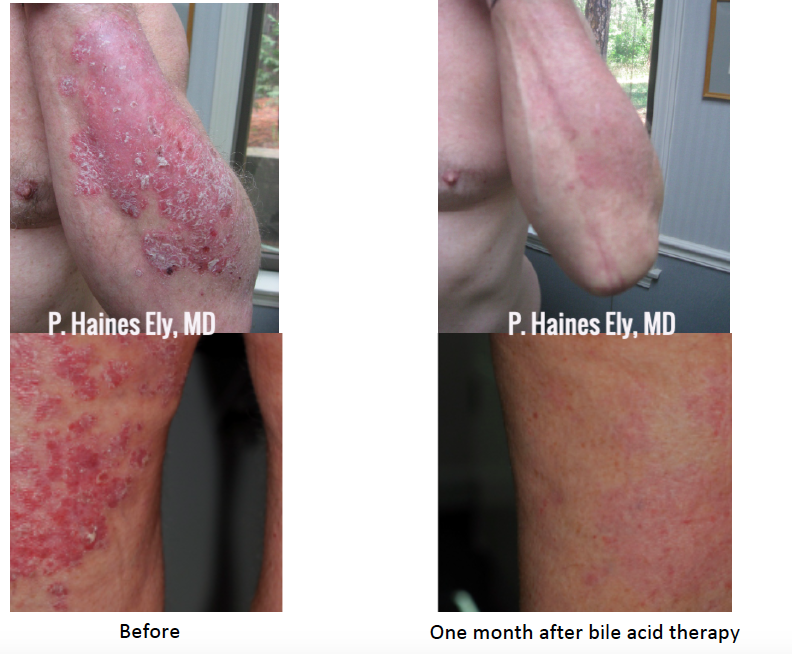 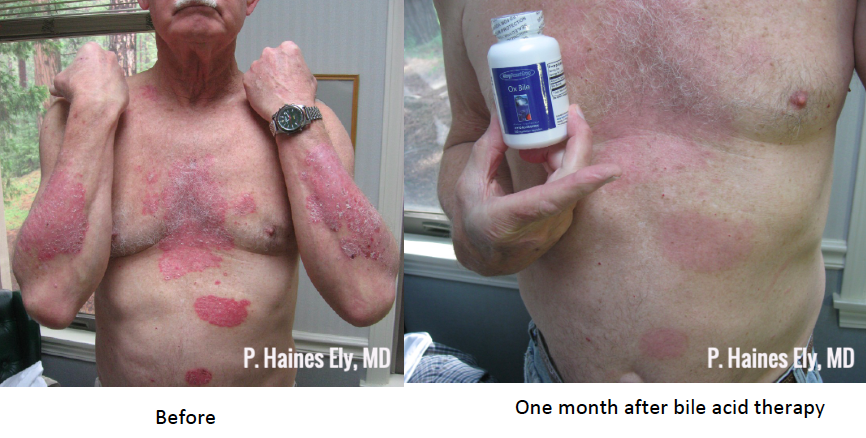 I’m not saying let’s ditch the pharmaceuticals.  But when I have mentioned this therapy with my psoriasis patients (albeit a short list so far), every single one of them was so grateful and excited to try a modality that is holistic, easily accessible, and affordable.  And your staff is happier because no prior authorizations are needed!  Hippocrates implored healers to “Let food be thy medicine and medicine be thy food.”  We don’t have to take out the prescription pad right away, every time.  When as physicians we take a more integrative stance, we give our patients more options and empower them to make lifestyle changes that will bring healing from the inside out.   Let’s do it!!

Haines Ely M.D. is a clinical professor of dermatology at U.C. Davis and spends his days with UC Davis residents at Mather Field VA Hospital in Sacramento. He discovered the bowel bypass syndrome in 1975, which began a lifelong study of the interconnection of the bowel and the skin.  He has successfully treated hundreds of psoriasis patients with bile acids and citrus bioflavinoids, plu.

Before and after photographs of patient are courtesy and property of Dr. Haines Ely

Did you enjoy this post? Find more on Integrative Dermatology here.