The world of melanoma is evolving, and dermatologists need to be equipped with the knowledge to help their patients navigate this landscape. Newer therapies for patients with more advanced stages of melanoma have not only drastically improved survival, but we as dermatologists must be prepared to recognize and treat the cutaneous side effects of these medications. This is a brief summary of common systemic therapies for melanoma with which every dermatologist should become familiar.

Melanoma tumor cells often have activating mutations that lead to constitutive activation of the MAP kinase pathway (See figure). Such activation can then lead to unregulated cell growth and proliferation. The most commonly detected mutation in BRAF results in the substitution of glutamic acid (E) for valine (V) at the 600th position in the BRAF protein and is referred to as BRAF V600E. Selective BRAF inhibitors, e.g. dabrafenib, encorafenib and vemurafenib, specifically target altered BRAF proteins. You can easily recognize these medications from their names, with raf indicating they target (B)RAF and nib identifying them as inhibitors. They are administered orally and chronically and lead to rapid responses but unfortunately tumor resistance commonly develops, often within six months. There are cutaneous side effects that the dermatologist should recognize, including morbilliform and folliculocentric eruptions, UVA photosensitivity (e.g. vemurafenib), keratoacanthomas/squamous cell carcinomas, and changes in melanocytic nevi (eruptive, enlargement, involution). 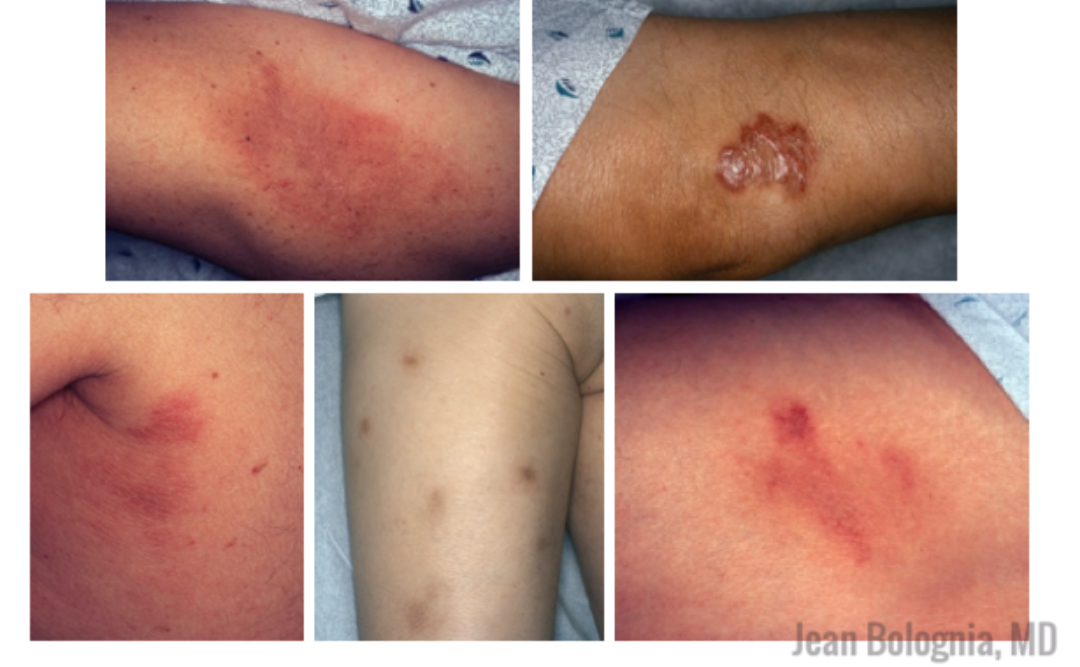 When mechanisms of resistance to selective BRAF inhibitors were investigated, a common finding was re-activation of the MAP kinase pathway via activation of MEK, another kinase that is downstream from BRAF. MEK inhibitors, e.g. binimetinib, cobimetinib, trametinib, were then combined with selective BRAF inhibitors to reduce the development of tumor resistance. These drugs are identified by the presence of a -metinib suffix. Interestingly, compared to BRAF inhibitors alone, combination BRAF+MEK therapy is associated with significantly less, not additive, cutaneous side effects – a real benefit to the patient.

Immunotherapy is designed to stimulate the immune system to attack immunogenic melanoma cells. These monoclonal antibodies inhibit inhibitory signals that normally downregulate the immune system and thus act as immune checkpoints. These drugs model after the saying “the enemy of my enemy is my friend,” only it’s now “the inhibitor of the immune inhibitor is the immune stimulator.” CTLA4 is a receptor on regulatory T cells that plays an important role in diminishing immune responses. By blocking the inhibitory function of CTLA4 during the priming phase, the anti-CTLA4 antibody ipilimumab increases T cell immune activity. Peripherally, when the PD-1 receptor on T cells binds to its ligand, PD-L1, on tumor cells, an inhibitory signal results. In a similar fashion, the anti-PD-1 monoclonal antibodies approved for melanoma – nivolumab and pembrolizumab – can increase anti-tumor immune activity. Anti-PD-L1 monoclonal antibodies (e.g. avelumab, atezolizumab, durvalumab) have been approved to treat other malignancies, including Merkel cell carcinoma. 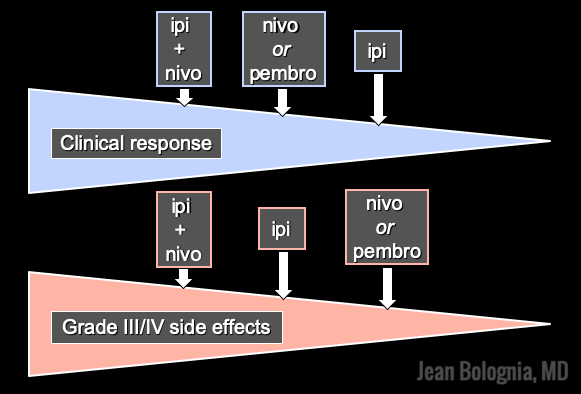 As these antibodies act to rev up the immune system, they are associated with a number of immune-mediated side effects, including autoimmune endocrinopathies, enterocolitis, hepatitis, myocarditis, and more. There is an ever-growing list of cutaneous side effects from checkpoint inhibitors that dermatologists need to recognize, including vitiligo-like depigmentation, pruritus, morbilliform, lichenoid, psoriasiform and eczematous eruptions, bullous pemphigoid, DRESS, SJS/TEN, and sarcoidosis. Studies have shown that vitiligo portends a favorable prognosis, implying successful immune activation against melanocytes.

This information was presented by Dr. Jean Bolognia at the 16th Annual ODAC Dermatology, Aesthetics and Surgical Conference held January 18th-21st, 2019 in Orlando, FL.  The above highlights from her lecture were written and compiled by Dr. Daniel Yanes, one of the 5 residents selected to participate in the Sun Resident Career Mentorship Program (a program supported by an educational grant from Sun Pharmaceutical Industries, Inc.). Dr. Yanes was paired with Dr. Jean Bolognia as his mentor.

Did you enjoy this post? Find more on Medical Dermatology here.