Lymphomatoid papulosis (LyP) is a CD30+ T-cell lymphoproliferative disorder (LPD) presenting as a recurrent eruption of papules and nodules which resolve spontaneously. CD30+ LPD prevalence in African American (AA)/Black patients is lower compared to White patients. CD30+ LPD has been recently reported to have worse outcomes in AA patients compared to White patients.

Lymphomatoid papulosis (LyP) and primary cutaneous anaplastic large cell lymphoma (ALCL) comprise a disease spectrum known as primary cutaneous CD30+ T-cell lymphoproliferative disorders (CD30+ LPD).1CD30+ LPD is the second most common group of cutaneous T-cell lymphomas (CTCL) after mycosis fungoides (MF) and is regarded as an indolent lymphoproliferative disorder1 LyP typically manifests clinically as a recurrent eruption of papules and nodules with variable central ulceration, scale or crust that resolve spontaneously within several weeks and may result in hyperpigmentation, hypopigmentation, and scarring. LyP histology is usually characterized by wedge-shaped cellular infiltrate that contains atypical large CD30+ lymphocytes.1 LyP is uncommon in Black patients and have been described in a few case reports.2 Analysis of two separate collaborative cancer databases in the united states showed that CD30+ LPD is mainly diagnosed in Caucasian patients and only rarely in African American (AA)/Black patients. AA/Blacks comprised only 7%-8%3,4 and 10%5 of all CD30+ LPD patients included in these two large databases. A recent study of prognostic factors in CD30+ LPD patients with an emphasis on outcomes among ethnic groups, showed that AA patients have a significantly poorer overall survival than Caucasians.5 These studies did not differentiate LyP from other CD30+ LPD cases and did not elaborate on the symptoms and clinical features. Therefore, these findings and recommendations are difficult to interpret in routine clinical practice. We herein report on the clinical characteristics and disease course of LyP in a series of eight AA/Black patients from our institution and three previously published case reports.

Eight AA/Black patients with a confirmed diagnosis of LyP were identified in a retrospective search of the tumor registry and pathology database at Memorial Sloan Kettering Cancer (Table 1). Five males and three females presented to us between the years 2000-2017 with a median age of 42 (range of 28-75 years). Six patients were non-hispanic, one hispanic and ethnicity was unknown in one patient. Five patients (63%) were also diagnosed with MF either before, at the same time, or after their LyP diagnosis. In half of the patients, lesions had occurred 1-4 years before the patients were diagnosed and presented to us. In one case, a diagnosis of LyP was made three years earlier; and the rest of the patients had an onset of less than one year prior to diagnosis. On physical examination at presentation, all patients had multiple lesions; however, one patient presented with one active lesion and few scars from past lesions, and one patient had only hyperpigmented macules and scars. In six (75%) of the patients, resolution of the LyP lesions resulted in hyperpigmented macules and scars (Fig. 1A-C). Seven patients were followed for 1 to 8 years, and most the patients (4/7, 57%) had documentation of active disease on their last visit despite different treatment approaches. 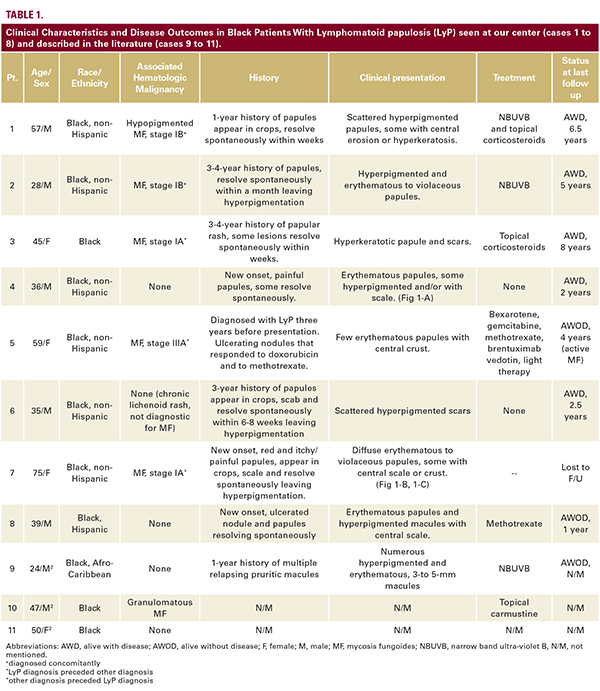 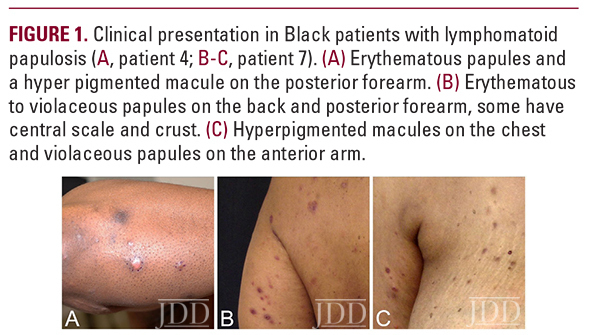 Major racial differences in incidence among cutaneous lymphoma subtypes have been reported.3,6 AA/Blacks have statistically higher incidence ratios of CTCL and MF than other races and a trend towards lower incidence of CD30+ LPD was found in a national US database, which included 31 AAs with CD30+ LPD.3 A more recent study of another database included 153 AA patients with CD30+ LPD who had a significantly shorter overall survival compared to Caucasians after adjusting for patient disease characteristics, socioeconomic factors and types of treatment.5 Our case series and three additional case reports suggest an indolent disease course of LyP in AA/Black patients. There are several possible explanations for the previous findings on poor survival in AA patients with CD30+ LPD. These results might be due to inclusion of ALCL and borderline cases with poorer prognosis compared to LyP. Another possibility is that patients with more aggressive CTCL variants (eg, transformed tumor-stage MF) might have been misdiagnosed or miscoded as CD30+ LPD. Our case series highlights the need for additional studies before clinical recommendations can be made regarding prognosis and treatment of LyP and CD30+ LPD in the different race groups. Our results support previous reports on an earlier-onset of disease seen in AA/Black patients with LyP5 as well as with other CTCL subtypes, such as MF.7 A delay in diagnosis of LyP is not uncommon since the self-healing crops of papules and nodules can be easily misdiagnosed as other malignant or inflammatory skin conditions (eg, arthropod bites). Most of the Black patients in our series had concurrent MF. The diagnosis of early-stage patch stage MF may be more difficult in Black skin where erythema is less pronounced compared to lighter skin types. Careful physical examination should be performed in Black patients who are diagnosed with LyP and no known history of MF. Once the diagnosis of LyP is made, several treatment approaches are possible. Noninterventional (“wait-and-see”) strategy is a legitimate approach, especially in patients with a limited number of lesions. Topical and skin-directed therapies (including topical steroids and phototherapy), and low-dose methotrexate are the best documented therapies for LyP.8 Our patients demonstrated heterogenous responses to different therapies used, with most of the patients still suffering from active disease after a follow-up periods of up to 8 years, highlighting that there is currently no curative therapy for LyP. The efficacy and safety of brentuximab vedotin, an antibody- drug conjugate directed against CD30, has recently been assessed for the treatment of LyP in 12 patients, including 2 AAs.9 Brentuximab vedotin was reported to be effective in treating LyP and has been suggested as a possible therapy in severe and refractory cases. Further studies are ongoing to optimize its dosing and to minimize adverse events.9,10

In conclusion, a diagnosis of LyP should be considered in Black patients who present with recurring eruption of papules or nodules that resolve spontaneously. Patients with LyP should be carefully examined for concurrent or later development of MF. Although an indolent course may be expected in Black patients, residual hyperpigmentation and scars following resolution of the LyP lesions are common in this population, highlighting the need for better treatments of this disorder in the Black population.