In this case series, JDD authors evaluate the efficacy and safety of intralesional triamcinolone acetonide injections (ILK) when used with topical minoxidil in the management of traction alopecia in 6 African American women.

Traction alopecia (TA) is a form of hair loss secondary to repetitive and/or prolonged tension to a hair follicle over an extended period of time. This typically results from wearing tight hairstyles, or an acute traumatic event.1,2 As the etiology is mechanical trauma of the hair follicle, it can occur in any ethnic/racial demographic or gender. It has been observed in ballerinas, as well as Sikh Indian males, all of whom wear hairstyles that exert tension on the frontotemporal hairline. However, most cases of TA occur in women of African descent.1,3

The diagnosis of TA can be made clinically, as well as through the histological examination of a scalp biopsy. The earliest signs of TA are perifollicular erythema and pruritus with or without surrounding papules and pustules.4 The fringe sign of TA is a clinical finding characterized by the presence of retained hair along the frontal and/or temporal hairline, and it has been shown to have high sensitivity for detecting early and late disease of TA.5 On dermoscopy, one may observe reduced hair density with an absence of follicular openings in late stages, and in earlier stages an absence of hairs with preserved follicular openings outlined in brown, particularly at the periphery of the patch of affected scalp, corresponding to the pigmented basal cell layer of the follicular infundibulum that can be seen on histology.6,7 The histological findings can also vary depending on the stage of the disease. Early findings on histology include trichomalacia, normal number of terminal hairs, preserved sebaceous glands, and increased number of telogen and catagen hairs.8 Late disease findings include a decreased number of terminal hair follicles which have been replaced by fibrous tracts, vellus hairs, and retained sebaceous glands.8

Recommended treatment for traction alopecia includes the use of minoxidil and intralesional steroid injections. However, evidence-based proof of the efficacy of ILK in the improvement of TA has not been reported in the literature. In this case series, we evaluate the efficacy and safety of intralesional triamcinolone acetonide injections (ILK) when used with topical minoxidil in the management of TA in 6 African American women.

A retrospective chart review was performed in patients carrying a diagnosis of TA, who were seen at an active hair disorder clinic between January 2016 and December 2017. All patients who were treated with ILK, and whose treatment progress were recorded with photographs were included. Those who used minoxidil as an adjunct treatment were also noted. The management of TA was assessed by comparing the changes in hair density along the frontotemporal hairline. All patients had been instructed to avoid tension-related hair care practices. 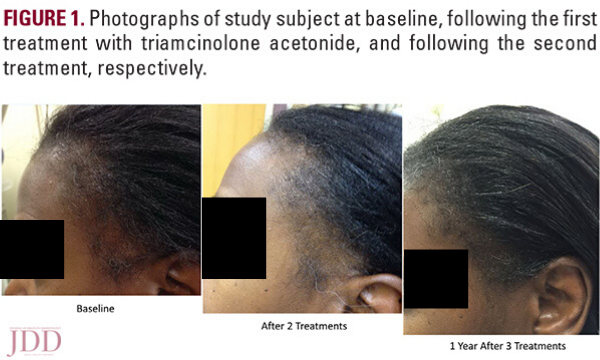 Only one study describing the treatment of traction alopecia is available in the literature, and it only reports on outcomes with topical minoxidil use.9Intralesional steroids have been used in the treatment of many dermatologic conditions, including scarring and nonscarring forms of alopecia. Its effectiveness is believed to be due its anti-inflammatory effects. Intralesional triamcinolone acetonide is particularly favored as the glucocorticoid agent of treatment in TA and several other dermatologic conditions because of its prolonged duration of action (which is longer than that of other triamcinolone salts).10 Furthermore, steroids administered intralesionally have the unique benefit of inserting a high concentration of medication to the affected area, more than would be possible from topical or oral steroids, while avoiding adverse systemic side effects. Side effects of intralesional corticosteroid injection include pain (due to the volume of fluid injected into the lesion, as well as the location of the injection—frontotemporal scalp tends to be the most sensitive area of the scalp), atrophy, and pigmentary changes at the site of injection.10

It is believed that subclinical inflammation may be a key component to the pathophysiology of the early stages of TA, which would explain the effectiveness of ILK in the treatment of TA. Some believe that the histological findings in cases of TA in the literature may be skewed towards late stage disease, a stage where signs of inflammation are not usually histologically apparent. 11However, in a study by Whiting, 24 patients with TA were identified, and histological findings included significant lympho-histiocytic inflammation around 14% of the lower and 38% of the mid and upper hair follicles in this cohort.12 Significant scarring was also present around 50% of the lower and around 86% of the mid and upper follicles in this group.12 In our study, clinical signs of inflammation, such as pustules, erythema, and flaking were not appreciated, however treatment with anti-inflammatory agents proved to be quite effective. Despite the scarring that can be seen, this study suggests that existing hair follicles can be recruited to grow terminal hairs with treatment, at least in the early to mid-stage cases.

We recommend treatment with ILK at a concentration of 5mg/ mL, to minimize risk of atrophy. Injections can be performed at intervals of 6 to 8 weeks, and a total of 3 treatments should be sufficient to determine if response will occur. Additionally, daily use of topical minoxidil 5%, and avoidance of traction at the hairline will likely maximize positive outcomes, as the minoxidil presumably prolongs the anagen phase of the growing hairs. As minoxidil can cause mild hypertrichosis, scalp irritation, or mild shedding early in treatment, these possible side effects should be discussed with patients before prescribing this medication. Finally, we recommend that all patients with traction alopecia for whom treatment is started have baseline and follow-up photographs taken. Photographic record of progress can be helpful to both clinicians and patients to fully appreciate the effectiveness of treatment. 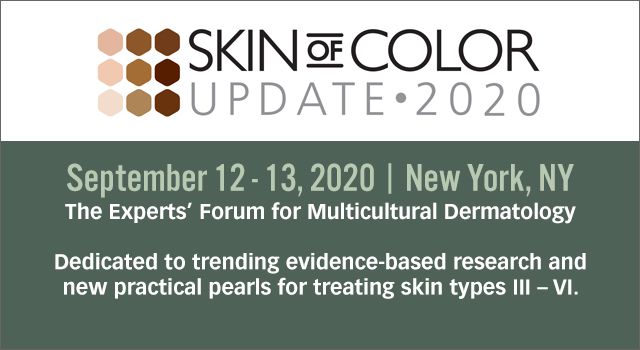