Despite their therapeutic efficacy in psoriasis, TNF inhibitors, such as adalimumab, have been implicated in paradoxical anti-TNF-induced psoriasis. In these cases, it is commonly thought that the offending TNF inhibitor should be immediately discontinued. However, we demonstrate that anti-TNF agents can be continued for treatment of underlying disease in the setting of paradoxical psoriasis. We also demonstrate the utility of adjunct treatment, specifically secukinumab and methotrexate, in the respective induction and maintenance of remission from anti-TNF-induced psoriasis.

A 60-year-old woman with a history of severe, relapsing PG requiring multi-drug therapy presented with an ulcer at the site of a recent skin biopsy (Figure 1a). Her treatment regimen for PG included adalimumab 40 mg twice monthly and a multidrug combination of mycophenolate mofetil and cyclosporine, which she had previously responded well to. Upon presentation, adalimumab was increased to 40 mg weekly alongside adjuvant therapy, which resulted in remission of her PG flare (Figure 1b). She then continued this regimen as maintenance therapy (Figure 2). 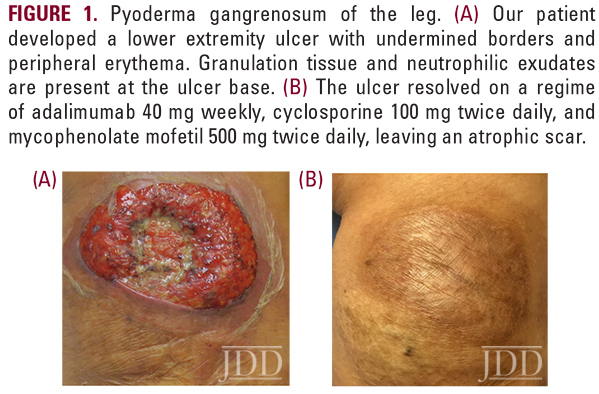 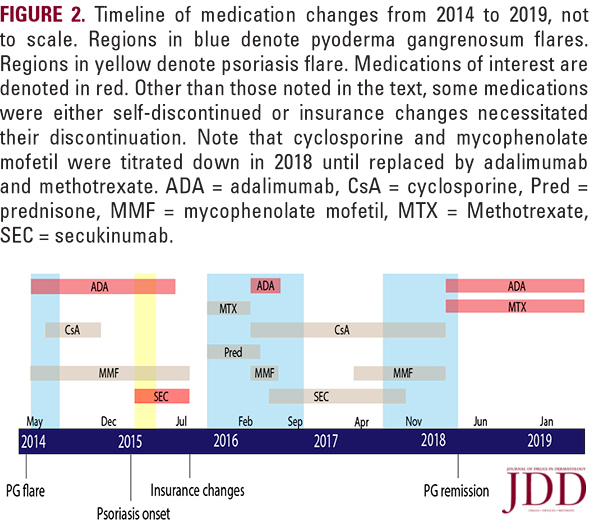 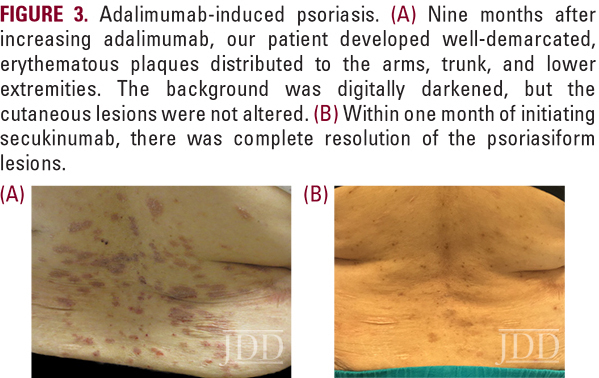 Nine months after starting her modified regimen, she returned to clinic with several new, well-demarcated, erythematous postauricular plaques. She was treated with topical corticosteroids for presumed seborrheic dermatitis. Over the course of two months, the lesions expanded to include well-demarcated, erythematous scaling plaques on her arms, trunk, scalp, and lower extremities (Figure 3a). Evaluation for fungal etiologies with KOH staining was negative. A diagnosis of adalimumab-induced psoriasis was favored, and she was started on secukinumab.

Within weeks of starting secukinumab, her psoriasis resolved despite remaining on adalimumab concurrently (Figure 3b). At this point, she had complications with insurance coverage and underwent numerous lapses in follow up visits, necessitating multiple medication changes (Figure 2). She later transitioned to secukinumab-only therapy but when her PG symptoms returned, secukinumab was discontinued and she was treated instead with a multidrug regimen of prednisone, cyclosporine, and mycophenolate mofetil.

When adalimumab (40 mg weekly) was approved by her insurance, it was restarted with the addition of methotrexate prophylactically to prevent another episode of adalimumabinduced psoriasis. With this combination, her PG symptoms went into remission without evidence of psoriasiform lesions for greater than one year to date (Figure 2).

Treatment of Pyoderma Gangrenosum
PG is a complex and multifactorial neutrophilic dermatosis requiring multi-drug therapy.4,5 It is estimated to occur in approximately 3 to 10 people per million per year.6 Although this disease is traditionally difficult to diagnose,7 recent diagnostic guidelines have been proposed.8,9 Currently, there are two randomized controlled trials (RCTs), multiple cohort studies , and limited open-label and case-control studies detailing treatment.10,11 In these, systemic steroids are most often used, followed by cyclosporine and biologics, with equivalent efficacy noted between prednisolone and cyclosporine.10

Infliximab, a TNF antagonist, is typically used in refractory cases of PG.10 Additional studies have documented PG remission with similar biologics, including adalimumab, etanercept, anakinra, and ustekinumab, but responses are often partial.12,13 In addition to partial response, TNF inhibitors can have unanticipated side effects, including paradoxical psoriasis. In fact, psoriasis is the third leading skin complication of anti-TNF therapy, behind xerosis and atopic dermatitis.14 And while there are over one hundred reported cases of TNF inhibitor-induced psoriasis,15ours is the first to demonstrate this phenomenon in a PG patient.

Here we illustrated the efficacy of secukinumab and, subsequently, methotrexate as adjunct agents in treating TNFinhibitor- induced psoriasis. These treatments have yet to be established for the induction and maintenance of remission from paradoxical psoriasis in the setting of uncontrolled underlying disease while maintaining anti-TNF therapy.18,19

Secukinumab has been used to treat recalcitrant anti-TNF induced psoriasis, but is not typically a first-line agent.16 As an IL-17 inhibitor, it is suited to treat both psoriasis and anti-TNFinduced psoriasis, which evidently must also be mediated by IL-17 producing Th17 cells.20 In addition to secukinumab’s efficacy in psoriasis, its mechanism of action is also implicated in PG treatment, as IL-17 mediates neutrophil migration and homeostasis.21,22 Additionally, IL-17 and its receptor are overexpressed in PG lesions and a greater ratio of IL-17-producing Th17 cells is seen in PG patients.23 For these reasons, IL-17 targeted therapy in PG has already been suggested.24,25

In our case, secukinumab was initiated for anti-TNF-induced psoriasis with the hope of also controlling the patient’s PG. In the end, while secukinumab induced remission of psoriasis, it only temporarily alleviated PG symptoms. One possible reason for this failure is that PG pathophysiology does not solely rely on IL-17 signaling and other inflammatory pathways are likely involved. Towards this end, new investigations of PG-associated conditions suggest it to be a disease of the innate immune system in which inflammasomes activate IL-8.1 As a result, IL-17 therapy may not be sufficient for all cases of PG.

Lastly, we examine methotrexate, a folate antimetabolite and dihydrofolate reductase inhibitor. It is a commonly cited systemic agent used to induce remission of mild to severe psoriasis as well as in anti-TNF-induced psoriasis.16,26 Our case demonstrates that as an adjunctive medication, methotrexate can effectively prevent the development of anti-TNF-induced psoriasis in a patient with a history of this paradoxical reaction.

This JDD article is early online, a new feature of the JDD continue publishing model.