The upper lateral cheek bears unique and distinct local characteristics that are key features in facial aesthetics and functionality. Its main landmarks are the lower eyelid, the lateral canthus, and the temporal hairline. When contemplating treatment options for defects in this area, the surgeon should take into consideration the possible effects of the reconstructive method on the preservation of aesthetics and function. Hence, the goals of a successful reconstruction are correct and stable lid positioning, inconspicuous malar (zygomatic) scars, and avoiding disturbance to the temporal hairline.¹ There are several suitable approaches, based on defect size, anatomical details, and functional concerns. Locally based skin grafts and flaps provide the best results because of superior color and texture compared with distant donor sites.2
In general, postoperative complications include mismatched skin (in terms of color, texture, and thickness), bulgy appearance of an inappropriately large graft, pincushioning of the flap (“trap door” deformity), and retraction of the lateral eyelid, causing lateral lower-eyelid ectropion.1-3 The risk for the latter complication increases as defects become larger and when the extent of lid involvement is substantial. We suggest a reconstructive technique that uses local skin and minimizes the risk of lower-lid retraction and consequent ectropion.

A template of the malar defect is copied to the ipsilateral temple above a virtual horizontal line from the lateral canthus to the superior border of the crus of helix. Incisions should be placed within relaxed skin tension lines4 to conceal scars (Figure 1). The defect and its outlined copy are joined by superior and inferior outline “lazy S’s” (Figure 2).

The healthy skin is excised and placed in a saline solution until the reconstruction is completed. The malar skin is undermined to create a flap that is raised and secured with deeply placed braided nonabsorbable sutures such as 3-0 TiCron™ (Covidien, Mansfield, MA) at the level of the temple. Closing the gap laterally facilitates approximation of the edges of the original defect while alleviating tension on the lower-eyelid skin, thereby minimizing the chance of ectropion (Mustardé principle5). If despite careful preoperative planning the final defect proves too large for a tension-free closure or lower-lid ectropion becomes an impending risk, the healthy skin excised from the temporal template can be grafted as reinforcement (Figure 3). 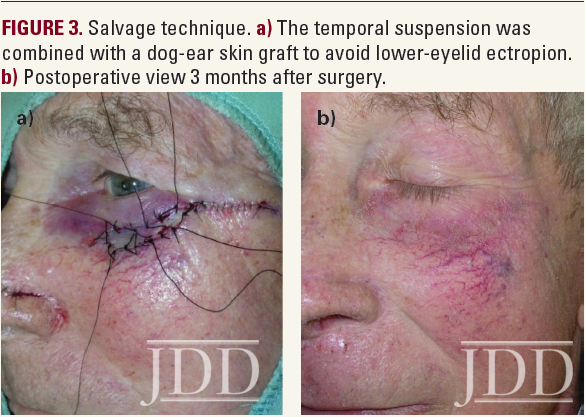 When reconstructing defects in the proximity of the lower eyelid, the surgeon should aim toward achieving correct height and stable lid margins. The malar skin texture is smooth and telangiectatic, giving it a ruby red appearance. It also has a convex contour, which makes it shiny when illuminated from any direction. Thereore, incorrectly placed scars and improperly reconstructed defects tend to stand out, reflecting a compromised aesthetic result. Skin grafts are simple and may be sufficient for relatively small and superficial defects. Upper lateral cheek defects may be reconstructed with a rhomboid or bilobed flap. However, these flaps are prone to pincushioning and bring paler skin into the more erythematous malar region, thus making the reconstruction obvious. Both flaps might end up with undesirable transposition of hair-bearing areas into non–hair-bearing area. Large defects may require a lateral cheek rotation or advancement flap, based on the lax skin in the 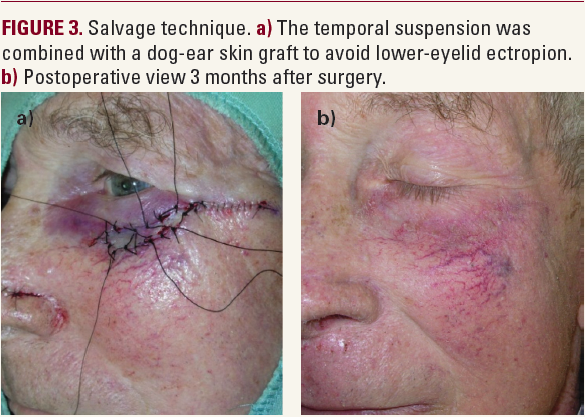 preauricular area for medial movement. These flaps should be undermined extensively and anchored to the periosteum of the infraorbital rim. If the flap is extended into the neck region, bunching of the skin in the posterior neck may occur, necessitating excision of a skin triangle to avoid dog-ear deformity.1
The temporal suspension flap advocated hereto allows easy reconstruction with the best matched skin. Transformation of the inferior pulling force to a cranially oriented vector practically eliminates the risk for lower eyelid ectropion. The excised healthy skin from the temporal region provides a fail-safe option for a salvage skin graft.

The anatomical characteristics of the upper lateral cheek must be considered when choosing between reconstructive options for defects in this region. We suggested a technically easy reconstructive option that provides the closest match to local tissues, substantially minimizes the risk for lower-eyelid ectropion, and provides a fail-safe option without need for additional scars or donor sites.

At the time of publication, the authors had no relevant conflicts of interest to disclose.