Dermoscopy, also known as epiluminescence microscopy, epiluminoscopy or skin surface microscopy, is a noninvasive technique for examination of skin by using a high quality magnifying lens and powerful lighting system to visualize the skin (Figure 1). Although dermoscopy was initially used for the study of mainly pigmented lesions, in the past several years its utility in non-pigmented skin tumors, inflammatory conditions and certain skin infections has become evident. Part one of this article will focus on dermoscopy with evaluation of pigmented lesions. Part two will focus on vasculature, specific features in non-pigmented skin tumors, and both inflammatory and infectious diseases. 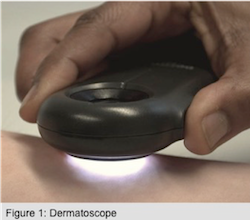 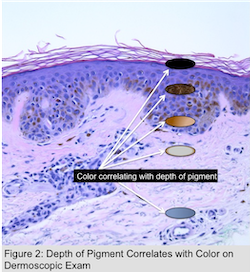 Many dermatoscopes allow for the option of using non-polarized light and polarized light along with contact and non-contact dermoscopy. Polarized dermoscopy (PD) allows for better visualization of deeper structures (located at the dermoepidermal junction [DEJ] or superficial dermis) such as vessels and collagen and is essentially ‘blind’ to superficial layers, while non-polarized light is better at visualizing superficial layers of the skin, such as comedo-like openings in seborrheic keratosis. If using contact dermoscopy, use of immersion fluid such as 70% isopropyl alcohol can enhance the image by reducing light reflection from the skin surface.

An important aspect of dermoscopy is the significance of different colors seen with dermoscopy, as the depth of pigment often determines color visualized on exam (Figure 2). For example, the darkest color (black) corresponds to superficial pigment in the upper layers of the epidermis (stratum corneum, stratum spinosum), while a medium brown typically occurs when melanin is found at the DEJ or lower epidermal layers. When the pigment is deeper (papillary dermis) the color is often slate blue (i.e. pigment drop in lichen planus), while the deepest location (reticular dermis) conveys a steel blue color (blue nevus). 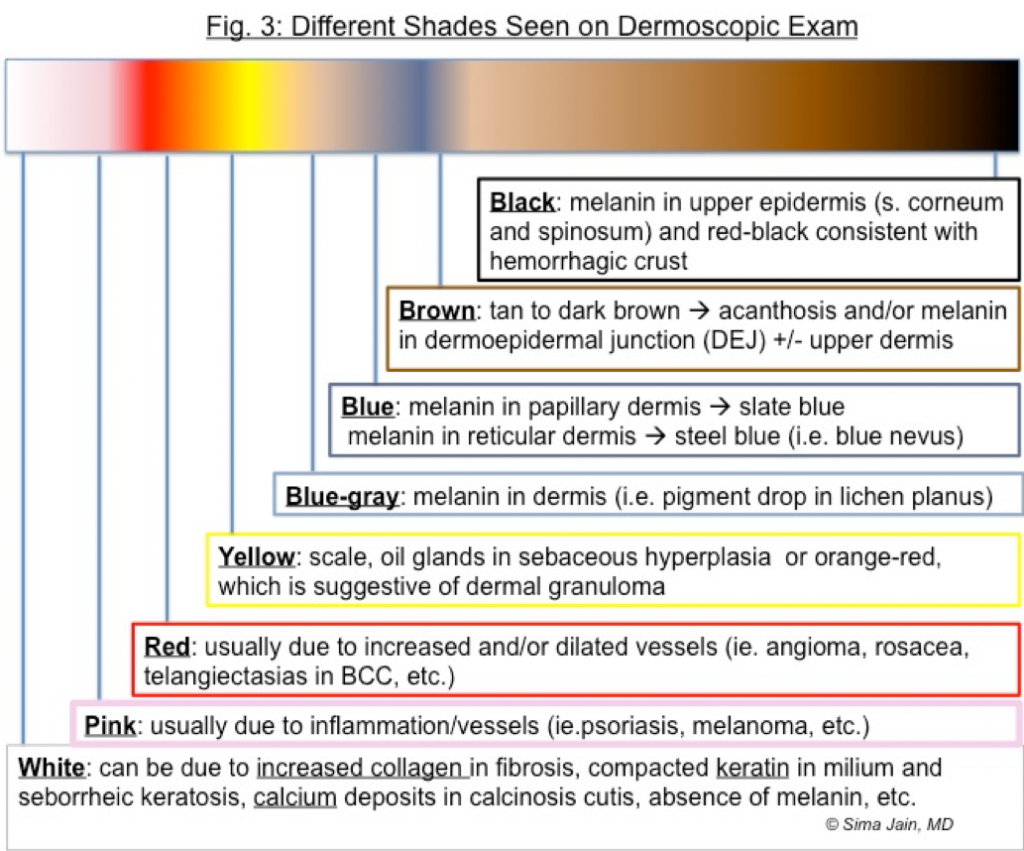 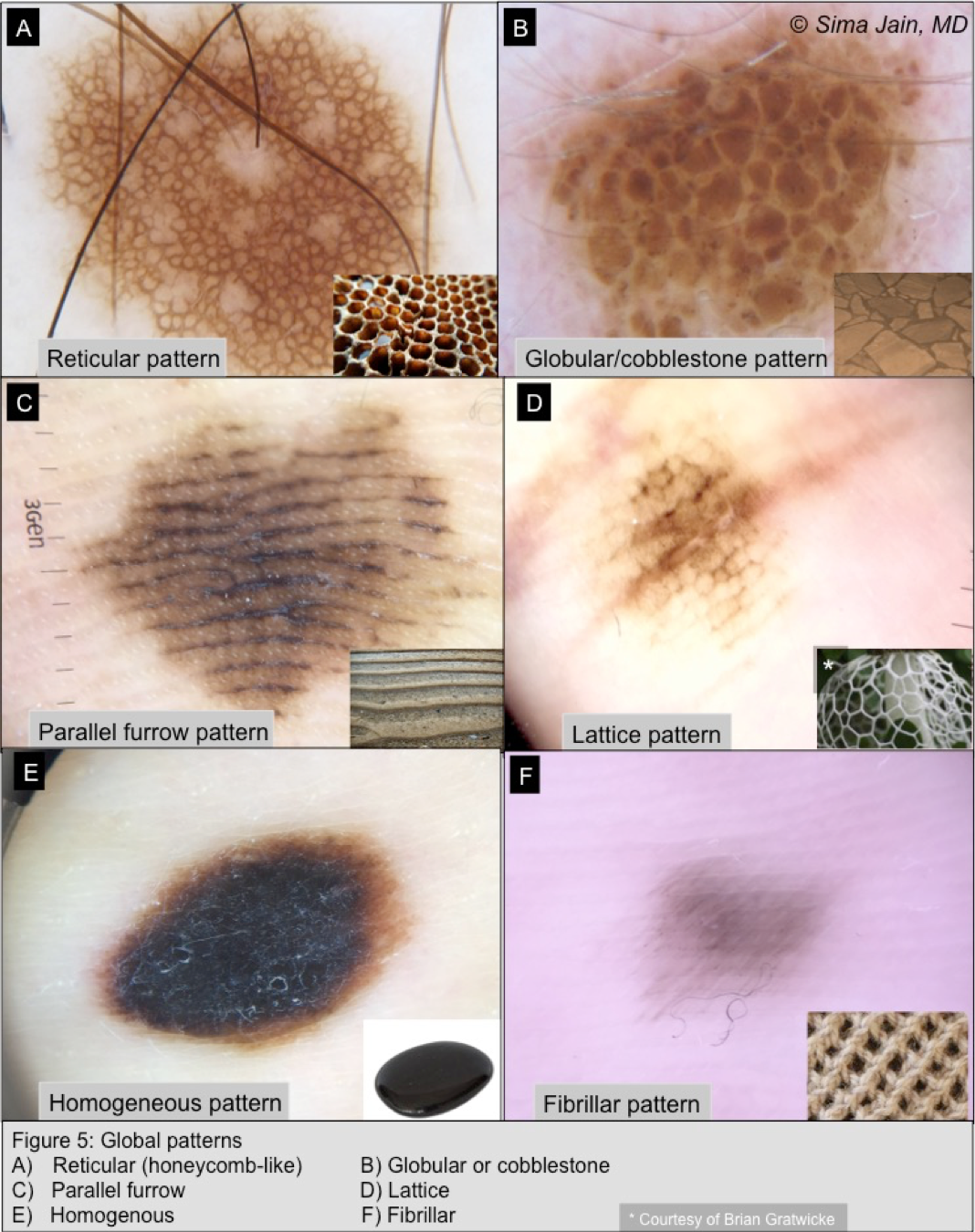 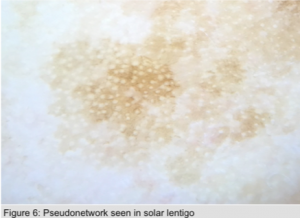 The term pseudonetwork is used to define homogenous pigmentation interrupted by nonpigmented ostia of adnexal structures characteristically seen on the face. It is mainly found in nonmelanocytic pigmented lesions on the face such as a solar lentigo, but it can also be seen in melanocytic lesions as well.  It is not a true pigment network as it is essentially junctional pigment that forms a broad mesh with white holes created by terminal/vellus follicles and sweat gland openings. 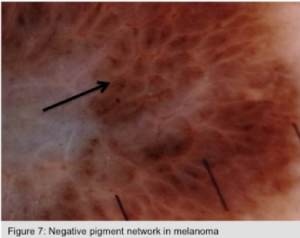 The term negative pigment network, also known as inverse network, reverse network or reticular depigmentation, reveals darker ‘holes’ with lighter areas filling the grid of the network. Lighter grid lines appear serpiginous but darker areas resemble elongated curved or tubular globules. This particular network is highly specific for melanoma, especially when focal and asymmetric, but it can also be seen in dermatofibromas, Spitz nevi and rarely in other nevi (i.e. congenital).

For evaluating dermoscopic images of pigmented lesions, there are four main diagnosis methods: pattern analysis, ABCD rule, Menzies method and 7-point checklist. We will go over pattern analysis here as this is considered the classic approach to diagnose melanocytic lesions and to differentiate between benign and malignant tumors. Pattern analysis is the overall assessment of the diagnostic value of features seen by dermoscopy. 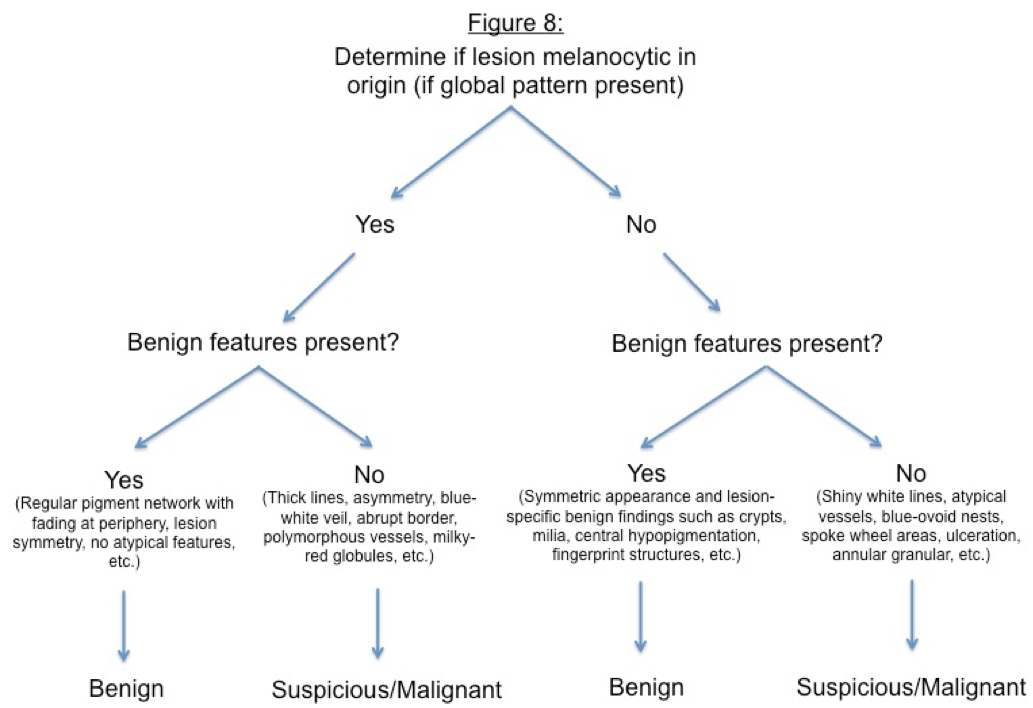 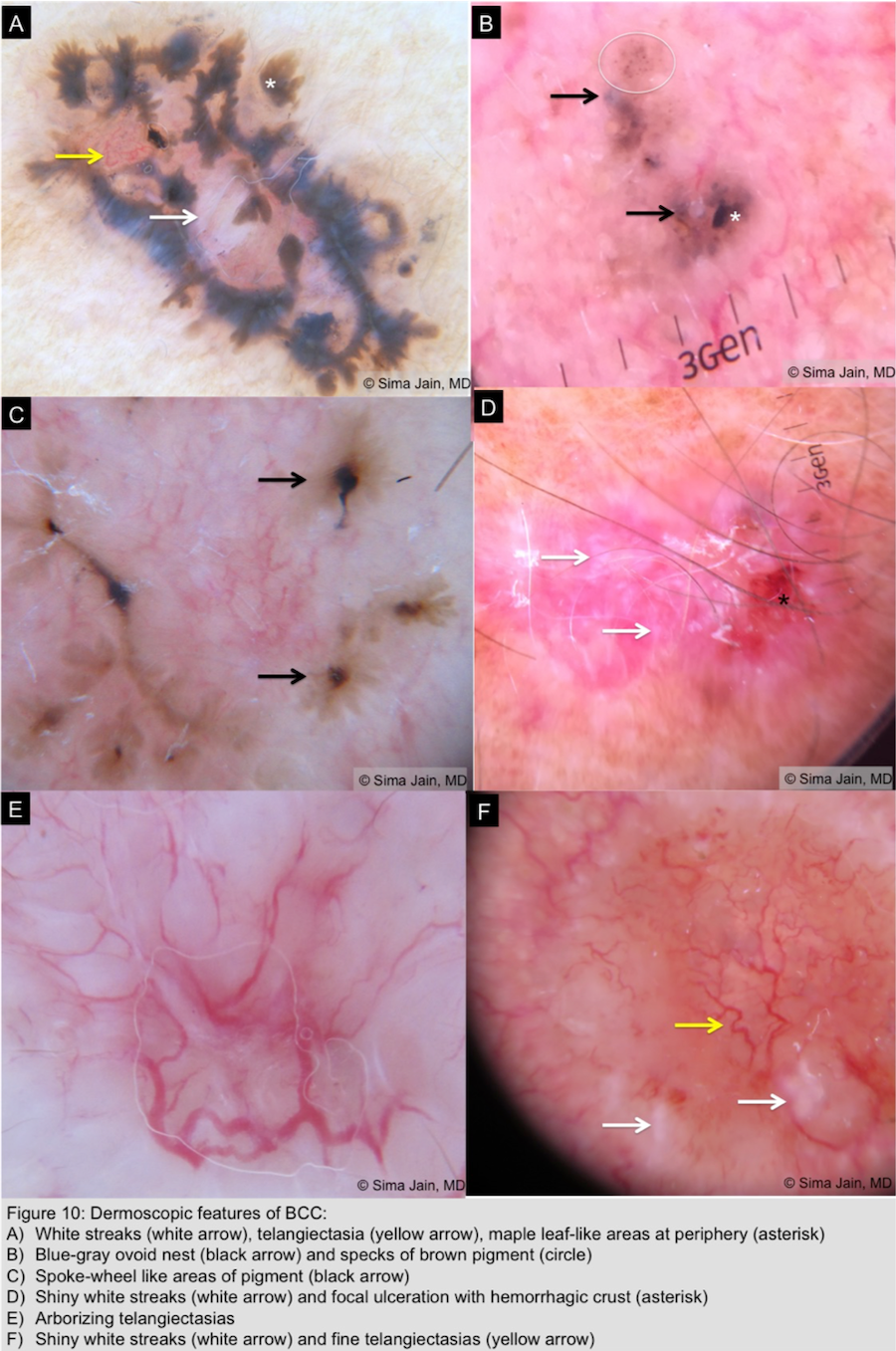 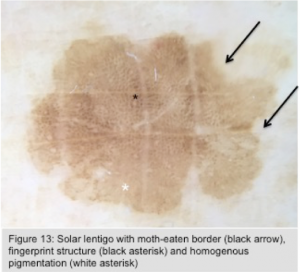 Part two of this 2-part dermoscopy review will focus on the importance of vasculature and the specific morphological features and patterns that help guide accurate diagnosis. It will also cover characteristic findings for specific conditions, including but not limited to verruca vulgaris, molluscum contagiosum, scabies, and psoriasis. Go to Part Two.

Did you know? Dr. Sima Jain will be leading a Dermoscopy workshop at the upcoming ODAC Dermatology, Aesthetic, Surgical Conference(ODAC) on Saturday, January 20th at the JW Marriott Grande Lakes in Orlando, FL. To learn more and register, click here. ODAC and Next Steps in Derm are products of SanovaWorks.

Get the eBook
Severe Psoriasis Presenting in 3-Year-Old Child With Nail Dystrophy: Response to Biologic Treatment
Translating Psoriasis Guidelines into Practice
The Utility or Lack Thereof of Skin Cancer Screening