Dermoscopy, also known as epiluminescence microscopy, epiluminoscopy or skin surface microscopy, is an important way to visualize subsurface structures in the epidermis and dermis. Part one of this article focused on the evaluation of pigmented lesions, and the second installment below will review the different vessel morphologies and patterns along with discussing specific findings in select cutaneous infections. This is not a comprehensive review but a brief overview of the most salient findings.

Although dermoscopy was initially thought to be useful for mainly pigmented lesions, vascular structures have gained well-deserved attention over time for its diagnostic usefulness.  Certain skin tumors have specific vessel morphologies and distribution that help aid in diagnosis and help in distinguishing between benign and malignant lesions (see Figure 1). 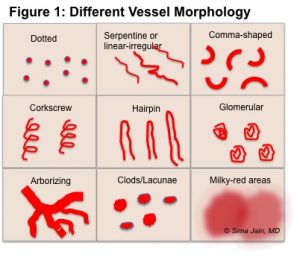 When visualizing vascular structures under contact dermoscopy (instead of noncontact polarized dermoscopy), the lens of the dermatoscope should have minimal pressure to avoid blanching of the vessels. Although alcohol is often used as the fluid interface to reduce surface reflection due to its convenience, ultrasound gel should be considered when evaluating vasculature to allow for negligible pressure on the lesion due to the gel’s high density.

It is important to keep in mind the correlation between dermoscopy and histology when evaluating vessel morphology. Since dermoscopy allows for the horizontal inspection of the skin, vessels oriented perpendicularly to the surface will appear as dots while those parallel to the skin will appear as lines. Therefore, in a patient with psoriasis and a finding of multiple red dots on dermoscopic exam, the morphology can be correlated to the typical dilated, vertically-oriented capillary loops within elongated dermal papillae seen on histopathology. Second, when evaluating a tumor, it is helpful to look at the overall number and type of vessels to determine tumor vascularity. This can be helpful in distinguishing between a benign and malignant growth, and it can be useful to determine the amount of tumor progression and volume in the latter type of growth. For example, a thick, nodular melanoma will have a different type of vascular network and density of vessels than will a superficial melanoma or a superficial basal cell carcinoma (BCC).

The varying configurations of vessels include but are not limited to (see Table 1, Figure 2-4): 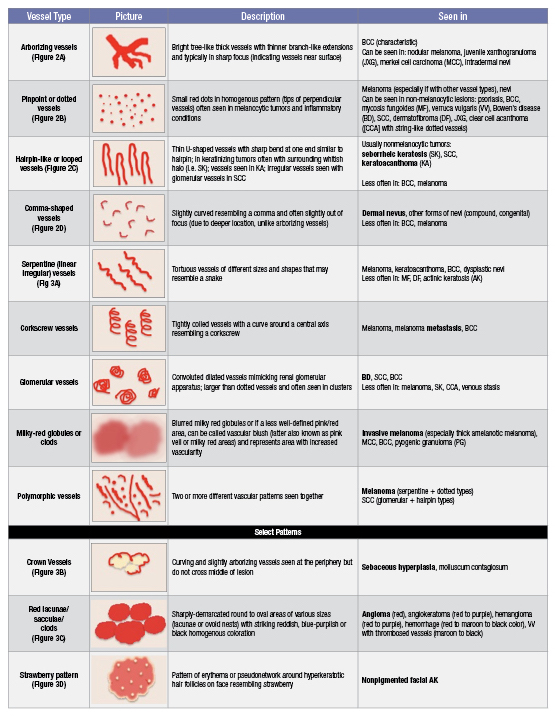 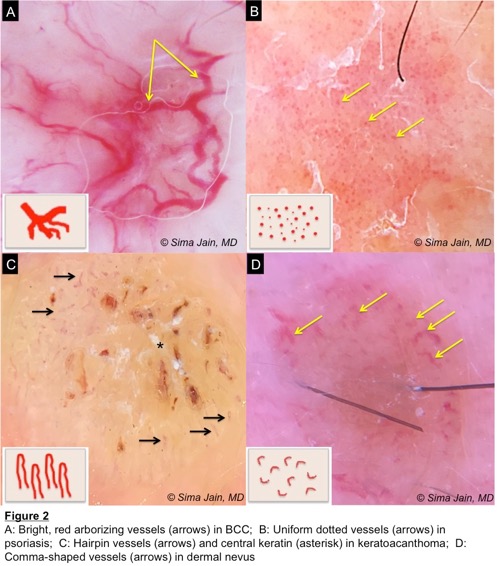 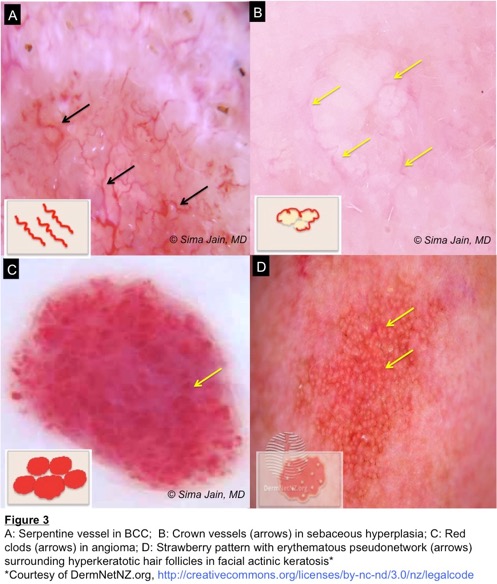 Dermoscopy can also be very helpful in diagnosing select skin infections, such as viral warts, molluscum contagiosum and scabies (Table 2).

Cutaneous warts caused by various strains of human papilloma virus are often diagnosed readily by their appearance, but dermoscopy can be quite helpful when they are not easily diagnosed. Verrucae vulgaris often show densely packed whitish papillae with tiny central pinpoint vessels (Figure 4B). The appearance can be reminiscent of frogspawn as the papilla often looks like a white halo around the pinpoint vessel. In addition, black to red dots/globules can be seen corresponding to thrombosed capillaries.

Another common skin infection with specific dermoscopic findings is molluscum contagiosum, which is a viral infection of epidermal keratinocytes that result in skin lesions with characteristic intracytoplastic inclusions.  Although clinical appearance is often classic with skin-colored to pink papules with central umbilication and a waxy appearance, sometimes the lesion can be confused with other growths. Dermoscopy can be very helpful in confirming the diagnosis of molluscum. The typical pattern shows a central pore with polylobular white to yellow amorphous structures, which are often surrounded by corona-type vessels (Figure 4A). 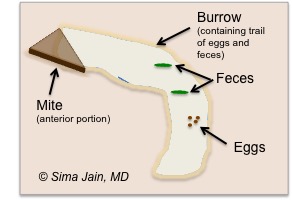 Scabies is the third cutaneous infection with characteristic dermoscopic findings that can be very helpful in making the correct diagnosis. The classic dermoscopic sign is a triangular brown structure, which is the fore portion of the mite, along with a trailing curvilinear burrow which forms a raised grayish to skin-colored tunnel in the stratum corneum (Figure 4C, 4D). The small dark triangle corresponds to the pigmented anterior part of mite (head and two anterior pairs of legs) and can be visualized on dermoscopy, while the posterior part (abdomen and legs) appears translucent and is not visualized well. The overall appearance (mite with burrow) has been also called ‘jet with contrail,’ and specifically the triangular brown structure (mite) has been referred to as ‘hanglider’ or ‘delta wing jet’ sign.  Sometimes a ‘mini triangle’ sign can be seen which is minute maturing mite heads (mini triangles) within the eggs in the burrow. 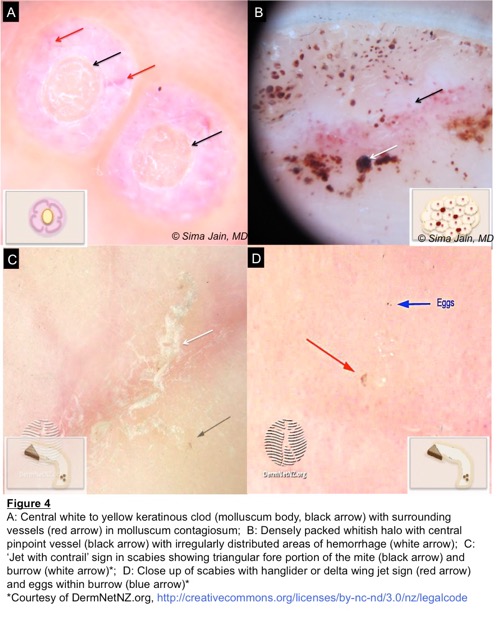 If you missed part 1 of this series, you can check it out here.

5. Neila J, Soyer HP. Key points in dermoscopy for diagnosis of melanomas including difficult to diagnose melanomas on the trunk and extremities. J Dermatol. 2011 Jan;38(1): 3-9.